The image above shows a tiny segment of a model of a mouse brain the lines show neurons and the dots show synapses. The image is intended to illustrate both the how complex even a small mammal's brain is and additionally how important the synapses between neurons are; it is the synapses that drive communication and conscious thought. With the exception of the memory centre the number of cells in the human brain does not increase after birth, what increase is the number of connections and hence synapses between neurons.

Structure of a neuron

You are not required to draw and label a neuron, but never-the-less you need to understand it's fascinating structure to appreciate it's function. 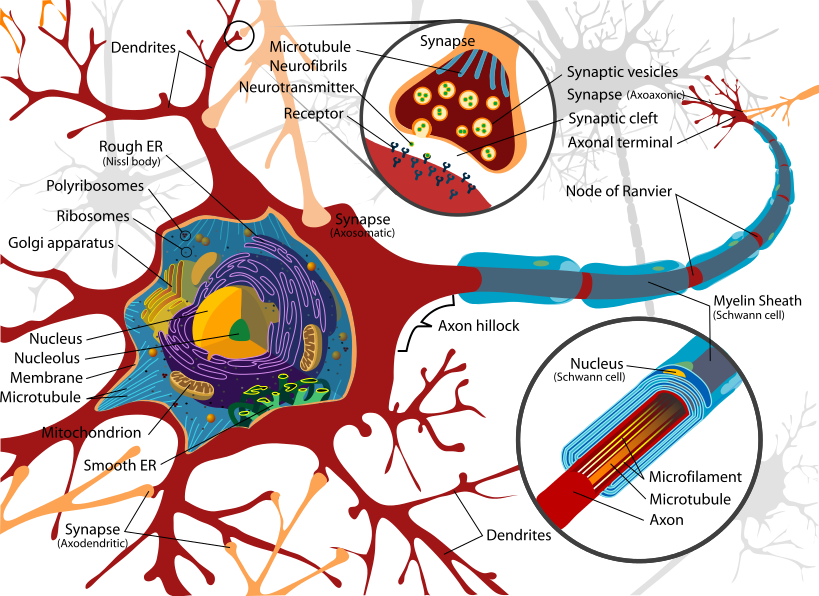 Cooperation and collaboration between groups of scientists—biologists are contributing to research into memory and learning. (4.3)

Higher functions of the brain including memory and learning are only partly understood at present and are being researched very actively. They have traditionally been investigated by psychologists but increasingly the techniques of molecular biology and biochemistry are being used to unravel the mechanisms at work. Other branches of science are also making important contributions, including biophysics, medicine, pharmacology and computer science.

The Centre for Neural Circuits and Behaviour at Oxford University is an excellent example of collaboration between scientists with different areas of expertise. The four group leaders of the research team and the area of science that they originally studied are:
source: Oxford University Press IB Course Companion
Proudly powered by Weebly