Essential idea: Alleles segregate during meiosis allowing new combinations to be formed by the fusion of gametes.

The micrographs above show the formation of bivalents (left) and the segregation caused by both anaphase I and II (right). These possesses combined with crossing over and random orientation ensure a near infinite variation of genetic information between gametes. 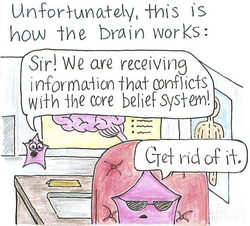 source: http://transition-lab.com/blog/
In 1922 the number of chromosomes counted in a human cell was 48. This remained the established number for 30 years, even though a review of photographic evidence from the time clearly showed that there were 46. For what reasons do existing beliefs carry a certain inertia?

Additionally to what extend is cognitive inertia governed by the brain's neurobiology?
Proudly powered by Weebly